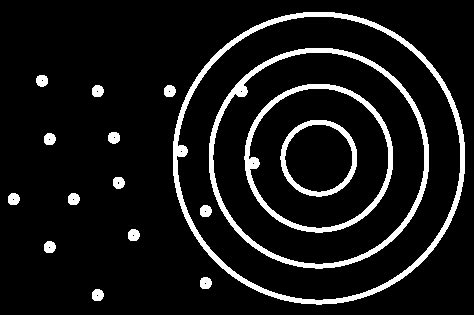 How complete is complete?  How full is full?  What part of all is all?  It seems to me that all too often when we use such words, we minimize them … we fall short of their actual meaning.  I realize that there are times when our language isn’t quite intended to be literal to the greatest extent.  But there are other circumstances that require precision in articulation … and in action.

Ever think about why we have to talk about giving it 110%?  Let’s face it, we can’t … first of all … but why isn’t 100% enough?  And beyond that, do we ever truly give 100%?  Do we ever do ALL we can?  “I did everything I could,” is a typical phrase we use, but I would suggest that we use it a bit flippantly.  Precision matters, particularly in our behaviors.  Let’s face it, you can’t be “mostly precise.”  We’re either fully precise, or we’re not precise.  We’re either fully truthful, or we’re not truthful.  We don’t need to give 110%, but we do need to give 100%.

This was the lesson learned rather the hard way by a first-century couple who were mostly truthful, mostly complete, mostly precise.  Reading through Acts 5 – 8 this week shed a light on this situation, in Acts 5:1-4 …

But there was a certain man named Ananias who, with his wife, Sapphira, sold some property.  He brought part of the money to the apostles, claiming it was the full amount.  With his wife’s consent, he kept the rest.  Then Peter said, “Ananias, why have you let Satan fill your heart?  You lied to the Holy Spirit, and you kept some of the money for yourself.  The property was your to sell or not sell, as you wished.  And after selling it, the money was also yours to give away.  How could you do a thing like this?  You weren’t lying to us but to God!”

As the scripture continues regarding Ananias’ and Sapphira’s “mostly precise” sacrificial contribution, we’re told that they both died instantly as a result of lying to God.  That suggests we might want to be diligent in understanding the lesson they learned in a tragic way.

When it comes right down to it, what Ananias and Sapphira did was no different … I would argue … than what many if not most of us do routinely.  They claimed to give 100% but gave less than 100%.  They said they gave their all, but it was less than their all.  100% is 100%.  All is all.  Why did they claim other than the full and complete truth?  We’re not totally sure from the text, but we can probably guess, perhaps from our personal experience.

Sometimes when we embellish our effort, benevolence or sacrifice, it comes from the most core failure of our humanity – pride.  We strive to shine a light on ourselves without having to incur our fullest cost.  I think we can conclude this might be part of Ananias’ and Sapphira’s motivation.  During this time in the early church, we read of the way the church came together as a community to support and provide for one another.  No doubt the community shared in the celebration of the joining of resources corporately and they wanted to be noticed.

Perhaps there’s also an element of laziness involved.  What I mean by that is that when we don’t give our all, it’s because we are unwilling to exert ourselves fully.  How often is it when we, say, watch a sporting event we note that one of the athletes is “giving it everything they’ve got?”  Query why we would note that someone is giving it all they’ve got, if everyone were doing so.  We shouldn’t point it out if it were commonplace and happening across the board.  It would be impossible to discern unless there were standouts, and if there are standouts that must mean that there are many or most that are giving less than their all.  So, let’s apply that to Ananias and Sapphira … they could have given everything, but they stopped short of giving all they could.  Maybe it’s not laziness in sport or work, for example, but it’s laziness in truthfulness.  Where do we fail in the same way?  I hazard a guess we all do, and perhaps often.

Here’s (finally) the point.  Mostly precise is not precise, and nowhere is that more harmful than in the economy of God.

Giving our complete effort … in our spiritual growth, faithfulness, striving for holiness, obedience to God’s leading in our day-to-day life, benevolence and generosity, etc. … must be a truly complete effort.  Anything less than complete is not complete.  We can’t let our pride, laziness or lack of faith or faithfulness diminish our completeness.

No one is more hurt from our failure in these ways than God.  Yep, we can (and do) hurt God.  When we lie, we lie to God.  When we cheat, steal, hurt or offend our fellow humans, even in the smallest of ways, we do so to God.  Falling short, even in miniscule scale, is falling short against God.

Fortunately, God knew we would (routinely, regularly, wantonly) do this, and for that reason (our sin) Jesus came to live, die and conquer death in remuneration of our offense to our Creator.  But this doesn’t obviate the need for completeness and precision in our desire to reduce both the frequency and scope of our incomplete and imprecise lives.

Let’s prayerfully seek God this week to reveal to us any areas of our life where we’re not devoting our fullest, where we, like Ananias and Sapphira, are cutting corners on our completeness whether knowingly or otherwise.  We might not be able to give God 110%, but we can give Him 100% in all areas of our spiritual life.  And where we don’t (because we all don’t in some or many areas), we need to confess that to Him and ask His help in moving the needle closer and closer to that mark, sincerely.  He will respond.  And He won’t be “mostly precise.”