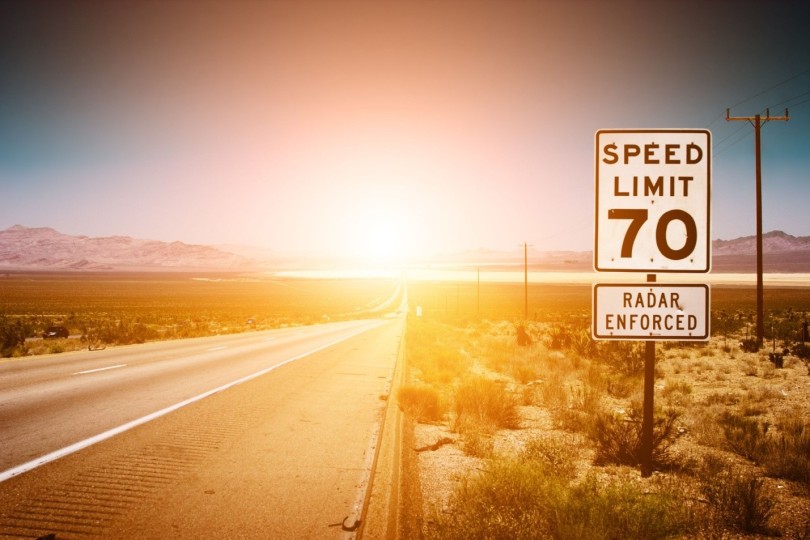 Knock on wood (and praise the Lord!), despite driving 120 miles to and from work every single day, I haven’t gotten a speeding ticket. This is despite the fact that the route I drive, through Camp Pendleton in San Diego, is the California equivalent of the Autobahn. It seems as though as I drive south through the last vestiges of Orange County into San Diego County, the hinterland into which one enters beginning in San Onofre almost operates like a southward vacuum, sucking the cars into what seems a near-doubling of the speed of everyone’s driving. I’m not immune, to be sure, but I let technology (my cruise control) govern what would otherwise be my natural inclinations.

Such has not always been true. Twenty years ago, I was doing basically the same drive, at a time when cell phones, satellite radio, Bluetooth technology, and (for me) cruise control weren’t available. Left to my own devices, I bought into the velocity vortex through Pendleton, but I generally kept my speed under wraps. One morning, though … I remember it all too well … I was making my daily jaunt at a relatively normal 70 mph, when out of nowhere a car sped past at probably 85 mph, almost as if to say, “I double-dog-dare you to catch me.” Well, I’m no Marty McFly (watch Back to the Future for context), but I didn’t like being double-dog-dared that way.   So, the accelerator and my foot got more closely acquainted. Soon, I was rushing down I-5 at about 85 mph trying to catch my contender when inevitably in my rearview mirror, too late to do anything about it, I see flashing lights speeding up next to me. The officer came up alongside me and motioned for me to get over to the side … and then … took off! I thought for a second he was just telling me, “cool down, and slow down.” But then I watched in amazement as he went in front of me to catch my competitor ALSO … pulling BOTH of us over and providing us with a much-needed, well-deserved, sobering speeding citation.

Naturally, my mind shifted to “wait … I wasn’t going as fast as he was” and “everyone else was speeding too” and “some were even going faster than I was.” But ultimately, it didn’t matter … posted right in front of me about ¼ mile down the freeway was “Speed Limit 65 MPH.” Whether or not I had driven slower than some or not as fast as other days, I’d broken the law. And all the previous safe driving I had done matter … today I’d broken it. So, as I read through my New Testament plan this week from Hebrews 11-13 and James 1-3, and given my repetitive commute, a passage in James 2 struck home for me … James 2:8-12:

Yes indeed, it is good when you obey the royal law as found in the Scriptures: “Love your neighbor as yourself.” But if you favor some people over others, you are committing a sin. You are guilty of breaking the law. For the person who keeps all of the laws except one is as guilty as a person who has broken all of God’s laws. For the same God who said, “You must not commit adultery,” also said, “You must not murder.” So if you murder someone but do not commit adultery, you have still broken the law. So whatever you say or whatever you do, remember that you will be judged by the law that sets you free.

As drivers … perhaps particularly in California, we tend to suffer from a combination of comparative excellence and selective memory. In fact, surveys show that 80-90 percent of drivers consider themselves better than average at driving. I’m no math genius, but that statistic doesn’t add up. Then similarly, when we’re driving and get pulled over, we bristle at how we’re being treated because we “weren’t doing” what we were stopped for, forgetting of course that with all the ways we’d broken the law previously, it was inevitable.

In the passage of James above, we see an example of how we as humans try to apply similar logic to our daily living in God’s creation and community. James reminds us that God’s standards are timeless (they apply at all times) and unified (they all apply equally). So, when we’ve broken one of God’s laws we’ve broken ALL of God’s laws. Even if we (improbably) make it through the course of a day and haven’t broken God’s laws THAT DAY, it doesn’t negate the fact that we’d broken them long ago. However, like when we get pulled over by a police officer, anytime we are confronted or convicted of the ways we’ve broken God’s law we try to explain them away. Often, we compare ourselves to others who’ve broken the law … and all too often make the comparator those who’ve broken far more egregious laws … murderers, rapists, etc. While we may be correct … in many respects we may not be that bad, we still are guilty of breaking the law, and hence breaking the ENTIRE law.

Ironically, that’s how we describe it when someone breaks a law, too, isn’t it? We say, “he broke the law.” We don’t generally say, “he broke A LAW.” So in some respects we recognize the concept in real life, but hesitate to apply the same principle to spiritual life. God’s law is unified and whole … we can’t pick and choose one law … you break one, you break all. No explaining, no negotiating, no comparing. Just like if every day of our life we’ve obeyed the speed limit, the one time we get caught for speeding, even only a couple mph over the speed limit, we are GUILTY of breaking the law.

But here’s the deal. That’s where Jesus comes in. If God’s law were about partial credit and comparisons between us and others, God perhaps wouldn’t have needed to send His Son to suffer, die, be buried, and resurrect from the dead. But God’s law IS timeless and unified … and yet, even though every single one of us has broken – by definition – ALL of God’s law … the Mediator between God and man (Jesus – 1 Timothy 2:5) came to declare us innocent by taking our guilt upon Himself. So while we fight and argue and explain how we’re “not that bad” or “did good today” we forget that as we declare the truth of our guilt, we have our loving Savior standing before us saying, “Don’t worry. You once were guilty, but I’ve paid the ticket and talked to the judge and the slate is wiped completely clean. Forever.”   If we put our trust in Him and follow Him (Romans 10:9), we can benefit from the fact that He’s already stood in our place, paid the fine, and erased forever any indication of the actual, real, undeniable guilt we used to have.

I only wish that were the case with the speed limit on southern California freeways.

Isn’t that a GREAT reason to be Thankful this week, though???!!!