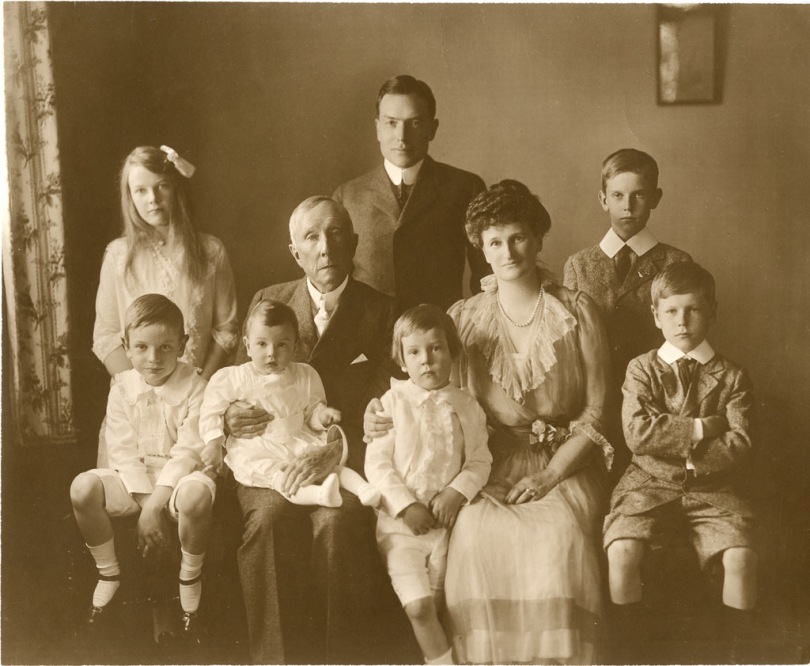 John Davison Rockefeller (pictured – the older man in the center) was a great nineteenth century businessman and philanthropist. He is credited with the creation of industries and structures that persist today to our collective benefit. Structures like the way our current system of philanthropy works. He also founded the University of Chicago, among others both domestically and abroad. No small contribution. When you consider that the Rockefeller family was renown in a lot of ways as business moguls and philanthropists, it’s really no surprise that they are considered to be among the most – if not THE most – wealthy and influential families in US history.

In my younger years, you associated wealth with the Rockefellers and the Rockefellers with wealth. I often joke with my wife Helen … especially when she spends too much money on clothing or whatever … that our last name is Rodriguez, not Rockefeller. Sometimes she seems to confuse that. 😎 Anyhow, there’s a famous story about the patriarch, known commonly as Senior, where he’s asked at some point, “How much money is enough money?” Senior replied, “Just a little bit more.”

My reading through the Gospels has taken me this past week through the Gospel of Mark and the first two chapters of Luke’s Gospel. I was reminded in reading through Mark how his writing style was really very focused on conveying the facts, and moving on to the next topic. It felt sort of like reading Cliff’s Notes back in the day … sort of. But in that simplistic, sort of straightforward style, I came across a profound reminder of both Jesus’ dedication to us, how He gave “just a little bit more,” and how our natural response should also be “just a little bit more.”

And they brought him to the place called Golgotha (which means Place of a Skull). And they offered him wine mixed with myrrh, but he did not take it. And they crucified him and divided his garments among them, casting lots for them, to decide what each should take. And it was the third hour when they crucified him. And the inscription of the charge against him read, “The King of the Jews.” And with him they crucified two robbers, one on his right and one on his left. And those who passed by derided him, wagging their heads and saying, “Aha! You who would destroy the temple and rebuild it in three days, save yourself, and come down from the cross!” So also the chief priests with the scribes mocked him to one another, saying, “He saved others; he cannot save himself. Let the Christ, the King of Israel, come down now from the cross that we may see and believe.” Those who were crucified with him also reviled him.

What I think is amazing about this is as we read about the passersby who are taunting Jesus, saying, “You kept saying you could do this, you could do that … you did a bunch of miracles! If you could do all these things, then why don’t you save yourself from this death and come down from the cross!” He could have. He absolutely could have.

Jesus could have chosen to come down from the cross. In the face of the taunting, in His awareness of the hardness and hatefulness of the hearts that were driving the words strewn at Him, He could have just decided we weren’t worth saving (could you blame Him based on what we see around us today?) or He could have decided that the act of taking the full brunt of the punishment was not necessary.   Going far enough was close enough. Or He could have identified an alternate solution. (Of course, theologically this would not have been sufficient or accurate but hopefully you get my point)

In any event, He CHOSE not to. He did just a little bit more. He had a greater purpose. He had love for us that was greater than what He was facing and He completed the task. Somewhat like Senior, He focused on giving, but unlike Senior He gave it ALL.

What can that tell us about things today? Today, people don’t tend to go out of their way. We don’t like to be inconvenienced. We don’t like to do more than the requirement. Unfortunately, oftentimes that is reflected in our faith journey. We do the bare minimum in living a Christian life. We go to church “most of the time.” We serve or volunteer “sometimes,” because “other people can step up.” We look past the homeless because, “they’re just gonna buy drugs and alcohol anyhow,” or we just throw them our spare change and feel like we’ve done something. We expect others to volunteer in the childcare ministry at church, but “that’s just not my thing.” We live like Christians on Sunday so we can afford to live like we want the rest of the days of the week.

So our response, in my not-so-humble opinion, should be the same. Almost like the little rubber hammer applied to our knee in the doctor’s office, our reflex should be to give just a little bit more … just a little bit more … to God. Stepping up to serve? Done. Loving our neighbor … ALL our neighbors? Done. Forgiving others like God forgave us? Done. Loving those different from us? Done. Knowing that ALL have sinned and fall short of the glory of God and still loving the sinner but hating the sin? Done. Rendering to Caesar what is Caesar’s and to God what is God’s? Done. Folks, it can go on and on and on. Our world is damaged goods today in part because God’s people are so fundamentally focused on my way, my preference, my belief, my safety, my world, my wealth, my comfort … but we’ve forgotten about the One who gave us an opportunity to have any of that. Our world is fundamentally broken because Jesus gave just a little bit more and we’ve turned a blind eye to that.

I pray this week, for all of us that we all recognize and realize all that Jesus did by giving His all. That as we reflect we also reflex in the only way I think we can to His doing just a little bit more. If we really understood the magnitude of His sacrificial gift to you and me … to each of us individually and to all of us collectively … logically and emotionally we could have no other reaction than in turn to do and give “just a little bit more.”