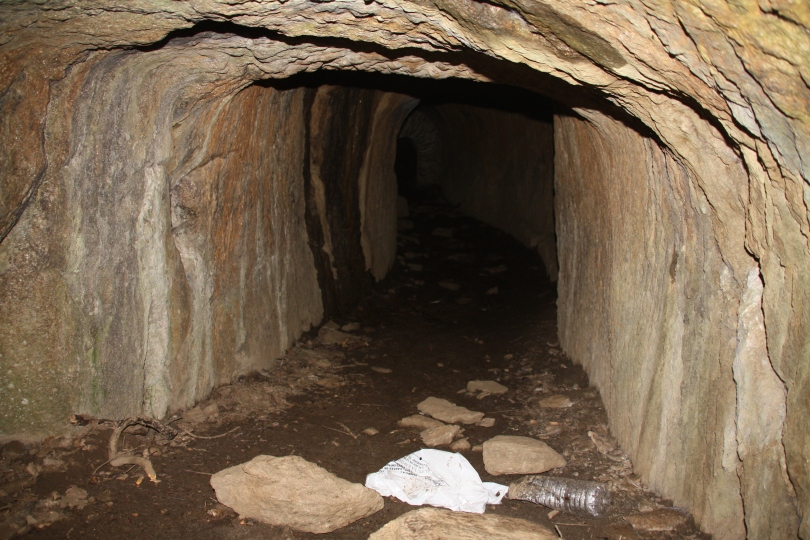 (Dedicated to “Big Tommy” Tom Sirotnak, USC Football Alumni and man who was faithful enough to be one of those who helped me navigate the cave and decide to follow the Guide)

There are certain things that you’ll never see me do. Most of them happen on the Discovery Channel or Nat Geo Wild. You know, those guys like “Survivorman,” who go into these crazy places, eat these crazy things, don’t worry about the bugs and other creepy-crawlies walking on them. Uh … no. [though, for the record, this Sunday at church I did eat the head half of a deep-fried, barbeque-flavored grasshopper and no, it did NOT taste like chicken]

I don’t mind the outdoors, hiking, exploring, etc. Where I begin to draw a very solid dividing line is places like dark caves. Spiders, insects, bats … any one of those is enough to keep me out. Couple in there the potential for holes, cliffs, and assorted other dangers, and there’s just no reason to explore. I’m happy to let others have the opportunity.

That being said, if I were to consider exploring it would have to be with an experienced guide. You know, someone who is familiar with the cave, knowledgeable about the perils that are there, where they exist, and how to safely navigate them. They would be the type of person who has a full perspective and gives me a frank and honest assessment of what’s ahead, regardless of whether I want to know or not. I mean, who wouldn’t want that person ahead of us, and who of us when warned wouldn’t heed the advice. Seriously, if that guide were to tell us, watch out here, step around there … are we going to argue? Are we going to be offended? Are we going to object to their telling us because it’s not what we were hoping to hear? Will we be mad that they tell us the surroundings are caving in? Oddly, in life, that’s exactly how it can be sometimes. I’ll explain momentarily, but it was the nudging I got as I read this week from Luke 2 – 14, and camped out on Luke 6:23-25 …

Rejoice on that day and leap for joy, for your reward in heaven is great [absolutely inexhaustible]; for their fathers used to treat the prophets in the same way. But woe (judgment is coming) to you who are rich [and place your faith in possessions while remaining spiritually impoverished], for you are [already] receiving your comfort in full [and there is nothing left to be awarded to you]. Woe to you who are well-fed (gorged, satiated) now, for you will be hungry. Woe to you who laugh now [enjoying a life of self-indulgence], for you will mourn and weep [and deeply long for God]. Woe to you when all the people speak well of you and praise you, for their fathers used to treat the false prophets in the same way.

These words of Jesus during the Sermon on the Mount reminded me of the people in my life who took the time and had the courage to guide me through what otherwise would have been some scary journeys in the caves of my life. Jesus, the ultimate example, demonstrated through his earthly ministry what it meant to meet people where they were, to help guide them, to tell them about the perils that lay ahead, and share the truth about their situation regardless of whether or not they wanted to hear it. Think about the passage above, do you think any of His hearers, particularly those he was telling, “Woe to you,” wanted to hear the message He was conveying? Hardly. But they needed to hear it.

If I were navigating a dark cave, led by a guide who knows the danger inherent in the environs, when that person alerts me to the fact that just a few yards ahead hidden by the vast darkness lies a cliff that would lead to a 500-foot death-drop, one might think that I would honor him / her, not be offended by them for pointing out that certain death lie ahead. But in our world today, if I love someone enough to point out that their spiritual journey is taking them eerily close to a fall from which they’d never recover and not survive, I’m vilified for telling them their path is heading to hazard.

Think about it … your slowly and carefully walking through the darkness. The person in front of you, who’s navigated the cave before tells you, “okay, watch out, because there’s a deadly drop three steps ahead.” Are we going to get mad and say, “well, that’s just your opinion!” Or, “I don’t believe that way … what’s true for you is true for you and what’s true for me is true for me!” Or, “that’s pretty judgmental of you!” Or, “how narrow-minded of you, don’t you know there are many paths through here and all of them lead to safety?” Let’s face it, we can accept truth and guidance in physical contexts in life, but when it comes to the eternal spiritual matters of life we flip out.

Maybe you’re already across the most important line … and walking with Christ. But maybe even so, you’re still teetering through the darkness and the walls are close to caving in. If someone is trying to warn you, please pay attention and tread cautiously, change direction, whatever. That person means well, and is trying to stop you from destruction.

Or maybe you’re someone familiar with the cave. You’re doing no one any favors holding back from telling them of the dangers ahead. Yeah, you take a chance of offending them … particularly if you tell them in an offensive or obnoxious manner. The world has enough annoying people. Don’t be another one while you’re trying to alert someone to avoid peril. Tell them. Help them. If the walls are caving in, loving them is letting them know.