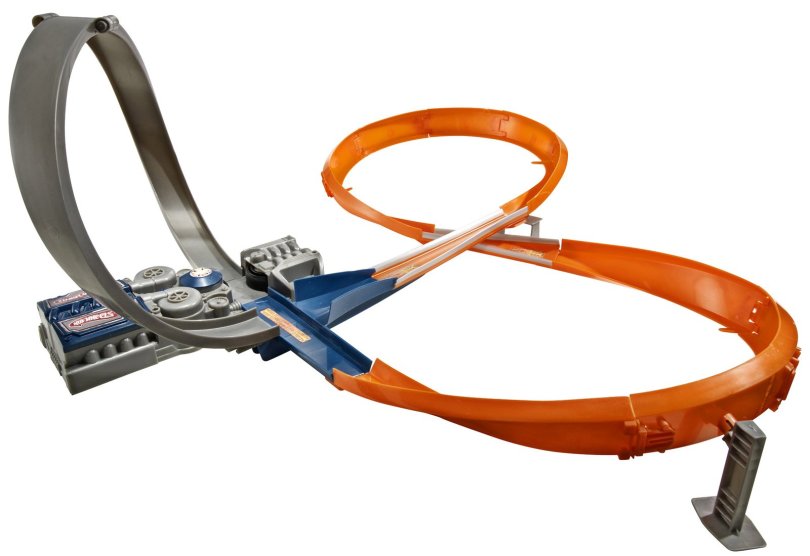 Hands down. Coolest toy EVER was Hot Wheels. I remember growing up as a kid playing for hours and hours and hours. I have to admit I think Hot Wheels were WAY better than Matchbox. It was something in the suspension of the wheels. I’d bet some of you know exactly what I’m talking about. And while I loved the cars, I think what made them most amazing were the tracks. Even though they weren’t super high-tech, they were flexible enough that you could bend them and configure them in ways that most times didn’t work, but just the prospect that they would was good enough.

There were also track sets. These were sort of pre-configured setups that got the imagination flowing in vivid ways, conjuring a combination between race car driving and Evil Knievel. Somehow, even though those cars were really small, I could practically imagine myself being inside, whipping around these amazing tracks – on tv – blew your mind. That said, it never seemed to work the way it did on tv. Somehow the car always made the jumps and loops and maneuvers in the commercials, but when we tried to do those all at home it never quite did the trick. Still Hot Wheels had to be the most fun toy, and had utility long into my teenage years.

An important component of those track sets were the launchers. The cars didn’t move on their own, they had to be propelled by something and usually it was by hand. But these battery-operated launchers would fit on the tracks, and using a couple fast-spinning wheels, would zoom the cars out on the track, around a figure-eight, over a loop, whatever. The problem was sometimes that the car wouldn’t get enough propulsion to make it around the track, depending on the configuration. Most times, the car would get just enough zip, to just barely make it over and around the track to get back to the launcher and vroom! it would crank around the track again. That is, until the batteries started wearing down.

Isn’t our life and spiritual life a little analogous? Sometimes we seem to just barely make it from point to point in life, nearly running out of momentum to clear the lap. With that in mind, I reflected on the gospel reading I did this week through The Message paraphrase, from Mark 14-16, and Luke 1-24. Two passages caught my attention … Mark 14:32-40 and Luke 4:1-13:

They came to an area called Gethsemane. Jesus told his disciples, “Sit here while I pray.” He took Peter, James, and John with him. He plunged into a sinkhole of dreadful agony. He told them, “I feel bad enough right now to die. Stay here and keep vigil with me.” Going a little ahead, he fell to the ground and prayed for a way out: “Papa, Father, you can—can’t you?—get me out of this. Take this cup away from me. But please, not what I want—what do you want?” He came back and found them sound asleep. He said to Peter, “Simon, you went to sleep on me? Can’t you stick it out with me a single hour? Stay alert, be in prayer, so you don’t enter the danger zone without even knowing it. Don’t be naive. Part of you is eager, ready for anything in God; but another part is as lazy as an old dog sleeping by the fire.” He then went back and prayed the same prayer. Returning, he again found them sound asleep. They simply couldn’t keep their eyes open, and they didn’t have a plausible excuse.

Now Jesus, full of the Holy Spirit, left the Jordan and was led by the Spirit into the wild. For forty wilderness days and nights he was tested by the Devil. He ate nothing during those days, and when the time was up he was hungry. The Devil, playing on his hunger, gave the first test: “Since you’re God’s Son, command this stone to turn into a loaf of bread.” Jesus answered by quoting Deuteronomy: “It takes more than bread to really live.” For the second test he led him up and spread out all the kingdoms of the earth on display at once. Then the Devil said, “They’re yours in all their splendor to serve your pleasure. I’m in charge of them all and can turn them over to whomever I wish. Worship me and they’re yours, the whole works.” Jesus refused, again backing his refusal with Deuteronomy: “Worship the Lord your God and only the Lord your God. Serve him with absolute single-heartedness.” For the third test the Devil took him to Jerusalem and put him on top of the Temple. He said, “If you are God’s Son, jump. It’s written, isn’t it, that ‘he has placed you in the care of angels to protect you; they will catch you; you won’t so much as stub your toe on a stone’?” “Yes,” said Jesus, “and it’s also written, ‘Don’t you dare tempt the Lord your God.’” That completed the testing. The Devil retreated temporarily, lying in wait for another opportunity.

These are pretty commonly known passages, but they display for us a model to use for constant launch in the laps of life.

In the first, Jesus embodies His surrender to His Father and a devotion to prayer. In the second, He shows us His knowledge of and reliance on scripture. When I think about the two wheels on the Hot Wheels launcher, I see these two imperative spiritual disciplines as the launch wheels in our daily walk with the Lord.

All of desire more out of life than just enduring between laps, exhaustedly crawling into the completion of one, desperate to muster the strength to commence … let alone survive and say nothing about thrive … the next lap as perilous as it might seem. For me, I’d like to come into that next lap accelerating, prepared to stand nose-to-nose up to that next lap with confidence in our Lord, that not only will He get us through, but that there will be growth and victory in that lap. But there’s no such thing as a free launch into that next lap, and Jesus demonstrated it well as He always does, showing us the way.

In the case of the Hot Wheels track, if we’re going to set up the car to do more than barely make it to the next lap and launcher, we simply place more launchers along the track. That way, we have multiple ways to get acceleration and hum around the turns, figure-eights, loops, etc., that accompany living life on a daily basis. And so it should be in our spiritual lives. Jesus demonstrated His dependence prayer and the Word of God as ways you and I can be launched. So it follows that the more dedicated we are to both, the more regular we engage in them, the more seriously we approach them, the more launches we’ll have through the laps and loops of life.

The question for us, then, is what are we doing? How serious are we devoted to prayer? To the Word? To studying what God’s Basic Instruction Before Leaving Earth tells us? Are they afterthoughts? Or Christmas and Easter events? Do we approach prayer frivolously, infrequently, passively? Do we have God’s Word on our bookshelf or do we open it from time to time? Or do we read it? Devour it, as the very food to our lives God desires it to be? If this hits home, welcome to the club with me. And join me in realizing that I really shouldn’t be surprised if the Hot Wheels track of life sometimes seems too difficult to circumnavigate.

Let’s you and I prayerfully decide today that we’re going to realize that there’s no such thing as a free launch. We need to devote ourselves to placing more launchers on our track, to incline ourselves to make them frequent, intentional touch points to propel us not just to the next lap, but through the next lap of life. Jesus already showed us how.