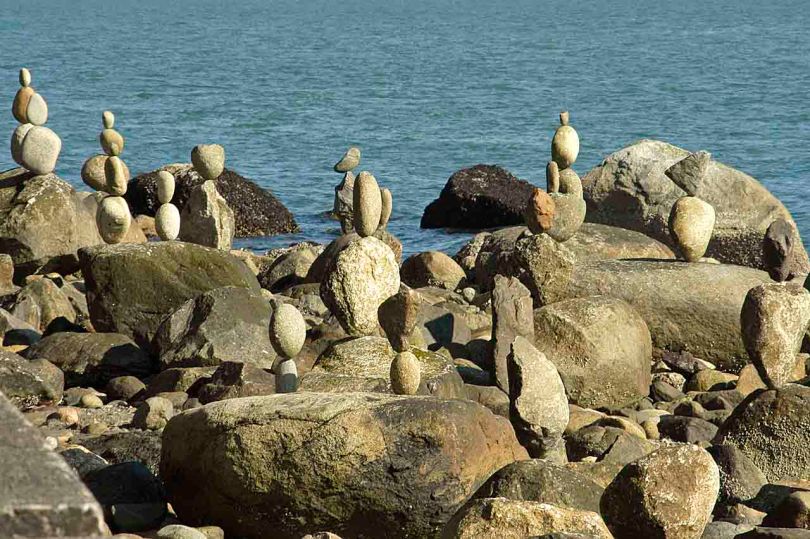 I love running in Vancouver.  The past couple nights while I’ve been here, I headed out after work down to the sea wall and do a six-mile loop along the water, through apartment complexes situated along the coastline, past park areas that are overloaded during the brief times during the summer when the weather gets particularly warm, and with views the entire time that are take-your-breath-away amazing.

One of the things I noticed the first time I came up here to work a few months ago, were these incredible rock formations along the rocky shoreline.  Rocks that were stacked up upon one another on top of a boulder, balanced so pristinely that they seemed to deny the certainty of the law of gravity.  It was hard to focus on the path I was running on because each of the formations was physics-defying and also unique.  And when I considered that each of those rock formations occurred by random, unaided chance over billions of years, it was nothing short of baffling.  I mean, we all know that given enough time, the right circumstances, and trial and error, rocks will eventually adapt to their environment and the beneficial surroundings that just haphazardly occur will allow rocks to simply settle upon one another in a balanced stack.

Okay, of course I’m being facetious.  I don’t think any reasonable person would look at the rock formations along the sea wall in Vancouver as uncaused.  I think we all would realize that rocks stacked in such an amazing and artistic way are purposely created by someone with vision, intelligence, a plan, and materials well-suited for the job.  No less certainly than when you visit Mt. Rushmore, it’s obvious to any observer that the mountain didn’t just evolve over time to include the faces of presidents Washington, Jefferson, Roosevelt, and Lincoln.

Who else has held the oceans in his hand?  Who has measured off the heavens with his fingers?  Who else knows the weight of the earth or has weighed the mountains and hills on a scale?  Who is able to advise the Spirit of the Lord?  Who knows enough to give him advice or teach him?  Has the Lord ever needed anyone’s advice?  Does he need instruction about what is good?  Did someone teach him what is right or show him the path of justice?  No, for all the nations of the world are but a drop in the bucket.  They are nothing more than dust on the scales.  He picks up the whole earth as though it were a grain of sand.

Look up into the heavens.  Who created all the stars?  He brings them out like an army, one after another, calling each by its name.  Because of his great power and incomparable strength, not a single one is missing.

Looking at those rock formations reminded me how we as people can attribute more power to creation than to the Creator.  We look around the planet we live on and pay homage to things we see.  Don’t get me wrong, when I run down the sea wall in Vancouver, or even when I’m on my long but beautiful commute to work along the California coast each day, I can’t help but marvel in the exquisite beauty of what my eyes get to behold.

That’s sort of the point … that is, God provides more than ample evidence of Who He is and yet some of us can carelessly look past it, and some of us outright deny it … and HIM!  The evidence is in everything we can behold.  Just like the rock art in Vancouver that no reasonable, rationale person would say happened by random chance with no help from an intelligence, isn’t it logical to conclude the same thing about the approximately 100 billion stars just in our Milky Way galaxy, and the 100 billion galaxies in the known universe?  Let’s face it, a star, let alone the 1 x 1024 stars estimated to be in the universe?

Frankly, the evidence is US!  How unique we all are, how complex our bodies are.  And yet there are some of us that would have us believe that WE are an accident.  We occurred out of the same ooze and sludge that everything else on Earth was.  Fortunate circumstances happened to some amoeba-filled mud and over billions of years you and I slithered out.  Oh yeah, somewhere along the way we figured out that we needed legs and grew them … even though legs were never a thing before that time.  Really?

So here’s the point.  To me, it makes no logical sense to look at all that is created within and around us … frankly, to look at us … and assume that it happened essentially accidentally.  Rather, it points to a Creator who took the time to fashion it all with pristine design, balance, forethought, intelligence, and – here’s the best part – LOVE.  The God that created all of the universe and the CRAZY amount of stars, planets, and everything within it all, the POWER that was able to speak all of that into existence, also created you and me.  He cared enough in all of His creation not to forget to make you and me.  Why?  LOVE.  He cares about us so much that He didn’t want to live without us.  All that creative power is also available to us to care and provide for our needs, to offer us the best life possible, and crucially, to save us from our sins.  Now that’s brilliant!

When we consider all of creation, we have to wonder … did that all happen essentially by accident over billions of years or did a great Designer craft it.  Maybe you should head to Vancouver sometime and check out the rock art and then give me your answer.