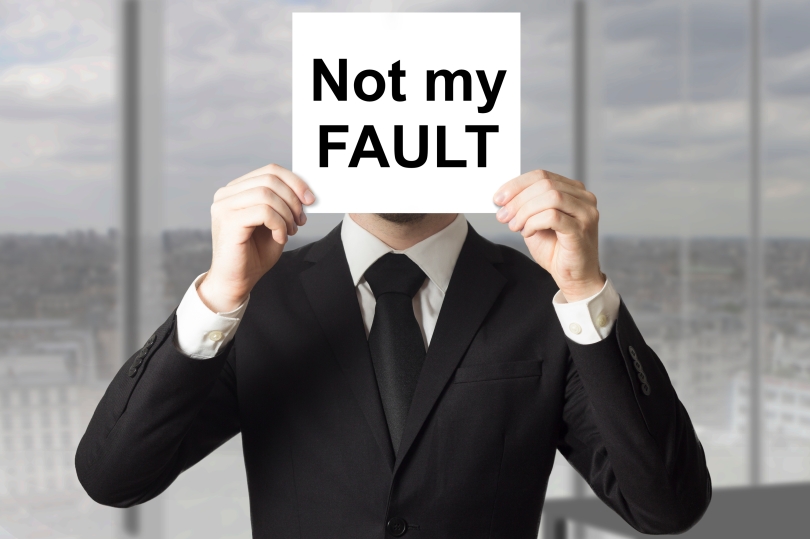 Old habits die hard. It’s a statement, and it’s a fact. Credited to Jeremy Belknap, a clergyman and historian in the 1700s, perhaps the reason for its longevity is because it’s descriptive of our reality and experience.

We can go back to the garden of Eden, to the history of the Israelites, to modern days, and frankly to my days personally. What’s the habit that dies hard? Well, when Adam and Eve sinned in the garden, and God confronted them, Adam’s response was “It was the woman you gave me …” (Genesis 3:12). When things went wrong, it was God’s fault. As the Israelites were wandering through the desert after being rescued from their 400 years of slavery at the hand of the Egyptians, they complained about dying, starving, and thirsting in the desert and wished they could be back in Egypt. When things went wrong, it was God’s fault. God got the “credit” for when circumstances went wrong. Things haven’t changed.

And yet, isn’t it incredibly natural to pat ourselves on the back for when life goes right? I’m not even talking about entertainers, professional athletes, business moguls, and politicians. I’m talking about me. And you. Us. I’m proud of what I’ve accomplished. The hard work I have given over the years to achieve results. And I’ll spend a lot of effort letting me and you know about it. I’m unabashed in my willingness to jump in front of the line to get the credit for when things go right. It was true for Adam and Eve (in fact, it’s the way Satan coaxed Eve into eating the fruit from the forbidden tree of the knowledge of good and evil). It was true for the Israelites when they fashioned a golden calf when Moses didn’t return off the mountain of God within a short time. Things haven’t changed.

When things go wrong, we blame God and give Him the credit. When things go right, we give ourselves the credit. At the crux of the issue is our God complex. We want to worship ourselves too often, and God not often enough. It’s why I think God reminds us that only He is God. As I read this week from Exodus 22-40, a brief but critical reminder shone a light on my (our) tendency to not give credit where credit is due. In a simple and short exhortation, we read in Exodus 23:13,

“Pay close attention to all my instructions. You must not call on the name of any other gods. Do not even speak their names.”

Sometimes we’re so busy trying to be God, that when God shows us that HE ALONE is God, we can’t handle the reality. The reality that things don’t always go our way. The reality that Someone else is in charge. The reality that we don’t control everything in life. The reality that God knows, understands, and does better than we ever could. But giving credit where credit is due still comes in short supply. When we make our bed, we do all we can not to lie in it.

Why is it God’s fault that He gave us free choice out of the abundance of His love for us, and when we choose outside of His best for us, we complain about the consequence? My consequences … for actions over years and years and years … were quite the bane of my existence. Bad choices in social behaviors, partying, alcohol, you name it. Even though the major potential outcomes some people go through weren’t my plight, I still had to deal with some tough realities my behaviors created. The problem is, I didn’t deal with them. I spent time running from God, questioning and accusing Him for where I wound up. In the end, I suffered from some health issues that – while in many ways the result of my decisions – resulted in me raising my fist at God wondering why He would let such bad things happen. We all do it.

On the flipside, even with some of the stupid behaviors I chose, I still had gifts and talents that allowed me to excel academically in other areas of life. I did well in school, received a number of scholastic awards and recognition, and had the opportunity to further my education at some great schools. All because of me, of course. I mean, I worked hard, I put in the effort, I studied, I put my mind to things. I, I, I, I, I. All credit to me. We all do it.

When God told His people … and us, by extension … “You must not call on the names of any other gods,” and even, “Do not even speak their names,” He was talking about ANY other gods. Including us. The god of me and the god of you. He doesn’t want anyone else to get the credit, because no one else deserves the credit.

Over-attributing credit to (blaming) God when things go wrong both 1) attempts to absolve us from responsibility for our choices and actions, and 2) fails to realize that God may sometimes use the times when things go “wrong” to help us grow, mature, and increase in faith.

Over-attributing credit to ourselves when things go right both 1) fails to acknowledge God’s providence, power, and love, and 2) highlights our desire to worship ourselves instead of God by wrongly letting us assume that we somehow created ourselves, endowed ourselves with gifts, skills, abilities, etc.

In the end, God should get the credit for everything … good, bad, and indifferent. He created us, He created the universe, He created our ability to have abilities. Yeah, even the bad stuff is up to Him and wouldn’t occur without His somehow allowing it, and when we realize that He allows it for purposes that bless us and glorify Him, we can put all things in the proper perspective. So it isn’t about giving credit where it’s due, it’s about realizing the He alone deserves credit for it all. This week, let’s pray not for understanding but for faith. Let’s ask God for faith to accept His will, and to help us forget our will. I need it, badly. Maybe you do too.